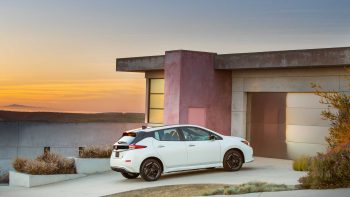 This week’s news is all about pushing boundaries, whether that’s attempting to break a cross-country record on an electric motorbike or developing what is essentially a combination of an electric speedboat and a formula 1 car.

Up first is the latest announcement from Nissan, who have revealed their latest model, the 2023 Nissan Leaf. The Leaf, currently the 4th best selling EV in the UK, has received a few upgrades, including a more powerful motor and as well as increased horsepower. Read on to find out more about Nissan’s latest model.

Our second story spotlight this week follows the story of two men who are challenging the electric motorcycle cross-country record in the US. The race is designed to raise awareness of global vehicle emissions, as well as promote the switch to electric vehicles.

Don’t forget about our quickfire round this week, where we share a handful of interesting news articles from around the globe. The rankings are in for the best countries in Europe to drive an EV, and the UK has achieved third place – not bad! You can also read about the E1 Racebird Electric Powerboat in all its hydrofoil glory, as it powers through its testing phase. 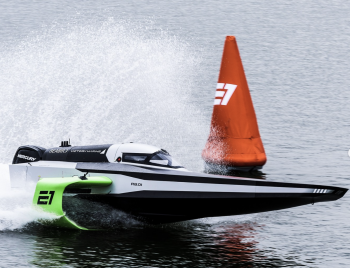 Designed to compete in the E1 World Electric Powerboat series, the Racebird combines safety, swiftness and a sleek design to effortlessly glide over the water.

There’s also news from NASA, who have announced that they have developed an EV battery that charges in as little as 15 minutes. Now that’s exciting stuff! Read about all this and more in this week’s quickfire round. 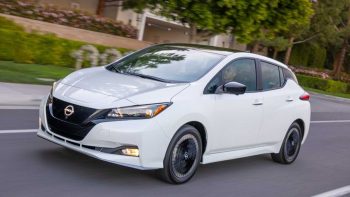 The Leaf has come a long way since its debut in December 2010. Over 500,000 units have been sold across 59 countries worldwide since then – it’s safe to say that the little Leaf has been a true pioneer when it comes to putting EVs firmly on the motoring map.

Now the Leaf returns with the latest 2023 model, refreshed and better than ever. It features a redesigned exterior – which we must say looks rather sleek, as well as a handful of extra goodies.

While the complete specs for the latest model will be released during its debut at the New York International Auto Show (April 15-24), some information has already been released. We know that the 2023 Nissan Leaf will be available in two trims, the S and SV plus. The SV is set to have 5-spoke 17-inch aluminium alloy wheels, as well as the Nissan ProPilot Assist4 (Nissan’s bespoke driver-assist system).

Looking under the bonnet, the Leaf S will feature a 40-kWh battery and a 110-kWh motor which result in approximately 147 horsepower being produced. We haven’t received much information yet regarding the range the 2023 Leaf will be able to achieve, however this figure is more than likely to be revealed at the NY Auto Show in the coming days.

Looking to the Future

When it comes to being a pioneer in the EV space, it’s hard to deny that Nissan is one of the key players. We can’t wait to see the full reveal coming soon, and hope that Nissan continues their path of pushing electric innovation.

Fancy getting your hands on a Nissan Leaf, but don’t want to buy one new? Check out our marketplace, where we list a range of fantastic second-hand electric vehicles.

One Challenge to Rule Them All

If anything is going to prove to the EV-naysayers that a long-distance journey on an e-motorcycle is possible, it’s the Charging Across America challenge. Spanning 5812 miles and producing zero emissions, the challenge is certainly not for the faint-hearted.

Set to begin on April 18th and finish on April 22nd, the race will feature motorcyclists Robert Swartz and Steven Day, who are aiming to beat the current record of 178 hours and 17 minutes.

Which Bikes Will They Be Riding?

Robert Swartz, the founder of the CAAC, is set to ride his 2022 Energica EVA EsseEsse9 heading westwards, while Steven Day, a veteran in the air force, will be tackling the eastern route on his Energica EVA Ribelle.

The challenge follows in the footsteps of the traditional Cannonball run from 1971, with the starting (and finishing!) points being the Red Bull Garage in New York City and Redondo Beach in California.

An Inspiration to Future e-Motorcycle Riders

The race provides an opportunity to witness the full extent of an e-motorcycle’s capabilities, as well as its benefits. Besides producing zero noise and emissions, the pair intend to raise awareness about the viability of EVs, as well as the expanding charging network across the country.